Recommended books (11)
Travel the world without leaving your chair. The target of the Read Around The World Challenge is to read at least one book written by an author from each and every country in the world. All books that are listed here as part of the "Read Around Asia Challenge" were written by authors from South Korea. Find a great book for the next part of your reading journey around the world from this book list. The following popular books have been recommended so far. 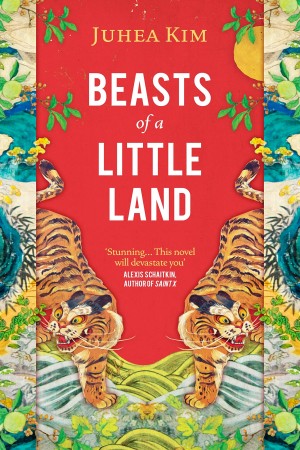 Beasts of a Little Land by Juhea Kim EN

South Korea
Description:
From the internationally bestselling author of The Vegetarian, a “rare and astonishing” (The Observer) portrait of political unrest and the universal struggle for justice. In the midst of a violent student uprising in South Korea, a young boy named Dong-ho is shockingly killed. The story of this tragic episode unfolds in a sequence of interconnected chapters as the victims and the bereaved encounter suppression, denial, and the echoing agony of the massacre. From Dong-ho’s best friend who meets his own fateful end; to an editor struggling against censorship; to a prisoner and a factory worker,... continue
Genre
Tags: Female author
Recommended: 08 Apr 2018

South Korea
Description:
This is not a murder story. It is the story of those left behind. Parasite meets The Good Son in this piercing psychological portrait of three women haunted by a brutal, unsolved crime. In the summer of 2002, nineteen-year-old Kim Hae-on was murdered in what became known as the High School Beauty Murder. There were two suspects: Shin Jeongjun, who had a rock-solid alibi, and Han Manu, to whom no evidence could be pinned. The case went cold. Seventeen years pass without justice, and the grief and uncertainty take a cruel toll on her younger sister, Da-on, in particular. Unable to move on with h... continue
Genre Mystery Thriller
Tags: Female author
Recommended: 06 Mar 2022

South Korea
Description:
* The million-copy bestseller* * National Book Award finalist * * One of the New York Times's 10 Best Books of 2017 * * Selected for Emma Watson's Our Shared Shelf book club * 'This is a captivating book... Min Jin Lee's novel takes us through four generations and each character's search for identity and success. It's a powerful story about resilience and compassion' BARACK OBAMA. Yeongdo, Korea 1911. In a small fishing village on the banks of the East Sea, a club-footed, cleft-lipped man marries a fifteen-year-old girl. The couple have one child, their beloved daughter Sunja. When Sunja falls... continue
Genre Historical Romance
Tags: Female author
Recommended: 20 Feb 2022

The Disaster Tourist : A Novel by Yun Ko-Eun EN

South Korea
Description:
This stunning “dystopian feminist eco-thriller” from an award-winning South Korean author “takes on climate change, sexual assault, greed, and dark tourism” (Ms. Magazine). Welcome to the desert island of Mui, where a paid vacation to paradise is nothing short of a disaster in this “mordantly witty novel [that] reads like a highly literary, ultra–incisive thriller” (Refinery29). Jungle is a cutting–edge travel agency specializing in tourism to destinations devastated by disaster and climate change. And until she found herself at the mercy of a predatory colleague, Yona was one of their top rep... continue
Genre Thriller
Tags: Female author
Recommended: 24 Aug 2022

The Forest of Stolen Girls by June Hur EN

South Korea
Description:
Suspenseful and richly atmospheric, June Hur's The Forest of Stolen Girls is a haunting historical mystery sure to keep readers guessing until the last page. 1426, Joseon (Korea). Hwani's family has never been the same since she and her younger sister went missing and were later found unconscious in the forest near a gruesome crime scene. Years later, Detective Min—Hwani's father—learns that thirteen girls have recently disappeared from the same forest that nearly stole his daughters. He travels to their hometown on the island of Jeju to investigate... only to vanish as well. Determined to fin... continue
Genre
Tags: Set in SOUTH KOREA Female author
Recommended: 01 Jan 2023

The Vegetarian : A Novel by Han Kang EN

South Korea
Description:
WINNER OF THE INTERNATIONAL BOOKER PRIZE • “[Han] Kang viscerally explores the limits of what a human brain and body can endure, and the strange beauty that can be found in even the most extreme forms of renunciation.”—Entertainment Weekly “Ferocious.”—The New York Times Book Review (Ten Best Books of the Year) “Both terrifying and terrific.”—Lauren Groff “Provocative [and] shocking.”—The Washington Post Before the nightmares began, Yeong-hye and her husband lived an ordinary, controlled life. But the dreams—invasive images of blood and brutality—torture her, driving Yeong-hye to purge her min... continue
Genre Cultural Horror
Tags: Set in SOUTH KOREA Female author
Recommended: 09 Apr 2022