Recommended books (18)
Travel the world without leaving your chair. The target of the Read Around The World Challenge is to read at least one book written by an author from each and every country in the world. All books that are listed here as part of the "Read Around Europe Challenge" were written by authors from Ukraine. Find a great book for the next part of your reading journey around the world from this book list. The following popular books have been recommended so far.

A Matter of Death and Life by Andrey Kurkov EN

Ukraine
Description:
'Kurkov is hugely talented. Truly very funny' Time Out Marital troubles? Sick of life? Suicide the answer? Why not get yourself a contract killer? Nothing easier, provided you communicate only by phone and box number. You give him your photograph, specify when and where to find you, then sit back and prepare to die. Murdered, you will be of greater interest than ever you were in life. More to him than met the eye will be the judgement. A mysterious killing lives long in the popular memory. Our hero meticulously plans his own demise, except for one detail: what if he suddenly decides he wants t... continue
Genre
Tags: Set in UKRAINE
Recommended: 30 Dec 2022

A Short History of Tractors in Ukrainian by Marina Lewycka EN

Ukraine
Description:
When their recently widowed father announces he plans to remarry, sisters Vera and Nadezhda realise they must put aside a lifetime of feuding in order to save him. His new love is a voluptuous gold-digger from the Ukraine half his age, with a proclivity for green satin underwear and boil-in-the-bag cuisine, who stops at nothing in her single minded pursuit of the luxury Western lifestyle she dreams of. But the old man, too, is pursuing his eccentric dreams - and writing a history of tractors in Ukrainian. A wise, tender and deeply funny novel about families, the healing of old wounds, the tria... continue
Genre Comic
Tags: Female author
Recommended: 06 Oct 2022

Death and the Penguin by Andrey Kurkov EN

Ukraine
Description:
Victor is depressed: his lover has dumped him, his short stories are too short, and the light has gone off in his dingy apartment. His only companion is Misha, the penguin he rescued from Kiev's Zoo, when it couldn't feed the animals anymore. Misha is the silent witness to Victor's despair, and joins in his celebration—fish and vodka—when Victor's luck seems to turn: he is commissioned to write obituaries. The weird thing is that the editor wants him to select subjects who are still alive, the movers and the shakers of the new, post-Communist society.
Genre Crime Humor
Tags: Male author
Recommended: 28 Jan 2018

Ukraine
Description:
Tells the stories of a fearful adolescent, an angry old woman, a dog's burial, a possessive mother and her son, a businessman's dinner, and a French explorer in Africa
Genre Short story Feminism
Tags: Set in BRAZIL Female author
Recommended: 06 Mar 2022

Ukraine
Description:
49-year-old safety inspector-turned-beekeeper Sergey Sergeich, wants little more than to help his bees collect their pollen in peace. But Sergey lives in Ukraine, where a lukewarm war of sporadic violence and constant propaganda has been dragging on for years. His simple mission on behalf of his bees leads him through some the hottest spots of the ongoing conflict, putting him in contact with combatants and civilians on both sides of the battle lines: loyalists, separatists, Russian occupiers, and Crimean Tatars. Grey Bees is as timely as the author's Ukraine Diaries were in 2014, but treats t... continue
Genre Historical
Tags: Male author
Recommended: 02 Sep 2022 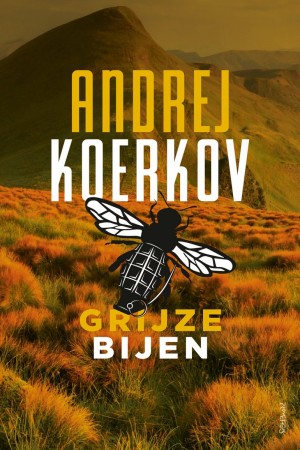 Ukraine
Description:
Klotsvog is a novel about being Jewish in the Soviet Union and the historical trauma of World War II--and it's a novel about the petty dramas and demons of one strikingly vain woman. Maya Abramovna Klotsvog has had quite a life, and she wants you to know all about it. Selfish, garrulous, and thoroughly entertaining, she tells us where she came from, who she didn't get along with, and what became of all her husbands and lovers. In Klotsvog, Margarita Khemlin creates a first-person narrator who is both deeply self-absorbed and deeply compelling. From Maya's perspective, Khemlin unfurls a retelli... continue
Genre
Tags: Set in UKRAINE Set in RUSSIA Female author
Recommended: 13 Nov 2022

Tevye the Dairyman and The Railroad Stories by Sholem Aleichem EN

Ukraine
Description:
Tells the stories of a milkman and his daughters and a salesman's encounters with fellow Jews while riding the train
Genre Short story Humor
Tags: Male author
Recommended: 22 Oct 2022

FIND BOOKS FROM UKRAINE BY GENRE

FIND BOOKS FROM UKRAINE BY LANGUAGE